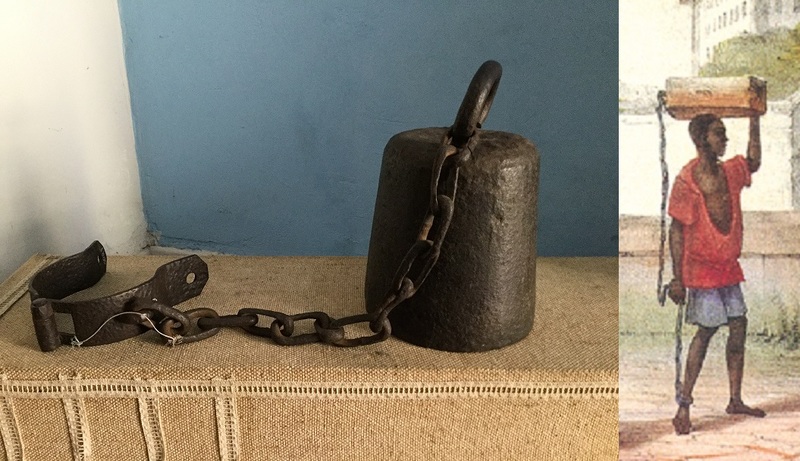 And that brings us to our li'l nephew, alone in background of the right-hand side of the painting. At first glance, he appears to be working--carrying some kind of goods, perhaps, from one location to another. But on closer inspections, we can see that the block on top of his head is chained to his ankle. The block appears to be a large slab of wood, though it could be stone.

Let's compare that to the similar device we find in The Black Museum. This device (pictured on the left above) is pure cast iron. It weights about 25kg (55lbs) and is attached to an iron chain that connects it to an ankle shackle.

This boy is not working.

First of all: That's a boy. He is not an adult. He is a child. In 1807, the English outlawed the transatlantic slave trade. Slavery was still practiced on the continent and in the colonies, but the capturing of Africans and dragging them across the sea was ostensibly ended. Brazil did not sign on until 1826, giving the new law no heed until 1831, and still yet, not closing Rio's slave ports until 1843. During the 19th century, the English patrolled the Atlantic to capture pirate slave ships and over the course of the century, liberated an estimated 150,000 illegally captured and trafficked Africans. Among those rescued, some ships had human cargoes comprised of anywhere from 1/4 to 2/3 youth and children.

Secondly: Work, for our purposes, refers to any productive activity in relationship to a group economy. In this sense, the boy is not working. The boy is idle. Being shackled to the slab that he has to carry on his head is the same thing as him not doing anything. The physical labor involved in carrying that slab or that iron weight is not 'work' in the sense that it is not productive in relationship to the group economy. In that condition, the boy has to find 'work' or he won't survive at all, in any condition.

Whenever we examine historical records of any kind, we must ask ourselves, "Who has the power to control the narrative?" In Colonial Rio de Janeiro, the Portuguese Crown had the power to commission works of art from the European artists they had invited to the city. Therefore, we can expect to find the colonial imagination of slave life to be a benevolent and charming reflection of the colonizer's desire to exalt himself, his world and his way of life. In spite of all of that power, we, however, can still examine such records for truth, for facts, for a clear-eyed understanding of the past because the violence and the cruelty were embedded in the systems they created. Systems, by definition, are designed to recreate themselves and therefore, we can still observe the effects all around us today.

Back to all exhibits
← closeup: Tigre